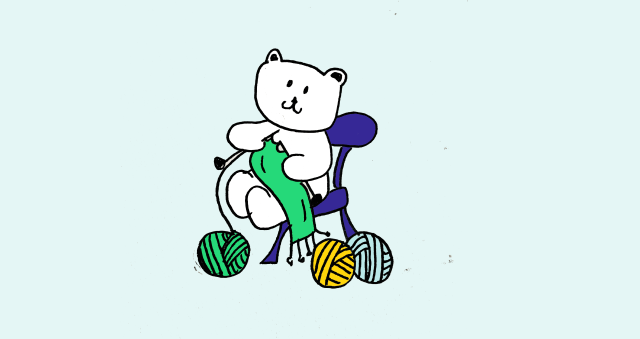 I've been knitting for nearly as long as I've been programming, but in the past few months my yarn obsessions have gotten out of hand. A friend of mine recently acquired a small flock of sheep that were in dire need of a shave. With more wool than they knew what to do with, my friend kindly mailed me an entire fleece's worth of raw wool. Now I'm deep in the weeds learning about fiber processing, natural dyeing, and handspinning yarn, all of which are brand new to me. (Turns out a sheep shave can be a yak shave, too.) I relish the opportunity to be a beginner, and to follow my interests down twisty passages to unknown destinations.

But, as an experienced programmer, it's been a while since I felt like a beginner. That's why I signed up for a batch at the Recurse Center this past winter. If you're unfamiliar, the Recurse Center is a three-month self-directed retreat for programmers. You spend your time doing whatever you think will make you a better programmer. I was eager to throw myself into learning just for the joy of it.

At the start of the retreat, the facilitators warned us against doing things just because we felt like we ought to. Instead, they encouraged us to learn the things we genuinely wanted to learn. Despite having a computer science degree, I had never learned much about operating systems, so I decided to dive into the deep end and follow along with Phillipp Oppermann's Writing an OS in Rust tutorial. I didn't know Rust, either, so I had to back up a bit and work through the Rust book first. It was a revelation. Rust's expressive type system and zero-cost abstractions made low-level programming feel approachable to me for the first time. By the end of the retreat, I had learned more in those few months than I had in years.

I learned about Oso through the Recurse Center's internal job board. I was struck by the uniqueness of the opportunity. It's rare to find a job that's at once deeply practical -- everyone wrestles with authorization sooner or later -- that also offers you the chance to work on the internals of a custom logic programming language. I knew that I'd be able to put my experience to work while still pushing the boundaries of my knowledge. All of this, and it was written in Rust? I was sold.

The interview process was respectful (in fact, it's entirely documented on the website) and fast. I spoke with Graham on a Wednesday, and by the next Friday, I had done two additional rounds of interviewing and received a job offer. (That's a personal record!) Accepting the offer was a no-brainer.

I've been at Oso for around five months now, and it's been all I'd hoped it would be. I'm constantly surprised at the things I've learned and built in such a short time frame. If you want to push yourself with the support of a brilliant and kind team that never stops making yarn puns at me, we're hiring.