Today Oso Cloud, our supercharged authorization as a service, is generally available (GA).

Do you remember the first time programming gave you superpowers? Headphones on, notifications off, locked in. Everything is clear. You have an idea, and the computer bends to your will.

For as long as we can remember, building permissions has been a slog…

“Arc is a banking platform, so getting authorization right is critical. We knew our requirements could get complex – we’ve already got 40 permissions across 9 roles – and we wanted to lean on the experts. So, we researched 5 products and chose Oso for 3 reasons:

“Our experience with Oso Cloud has been great – both the product and the team behind it. Its flexibility and how powerful it is are what stand out. And whereas most options we researched would’ve required architecture changes and/or compromises, Oso was easy to integrate and it lets us define exactly what we need.”

We first launched the Oso open source library in 2020. It has since been downloaded millions of times and is used in production at companies like Intercom, Wayfair, Visa, Codecademy, Oxide, Verizon, Optum – everyone from startups to the Fortune 100.

With the Oso library, we introduced Polar, a declarative policy language built specifically for modeling authorization. We also introduced enforcement APIs for checking the most common authorization scenarios, like “Can this user access this resource?” and “What are all the resources this user can access?”

The Oso library was the first step in bringing the world closer to our vision. Today we take another leap forward with the launch of Oso Cloud, which builds on the Oso library and helps solve a new class of problems. Most developers shudder at the idea of picking up an authorization project off the proverbial Jira board. But now when you need to add roles, sharing, fine-grained access, or any other access model to your app, you can use Oso Cloud and feel supercharged. Engineering teams using Oso Cloud typically ship authorization features in 1/10 of the time and rest easier knowing their apps are safe.

This launch is the culmination of 3+ years of R&D, 11 months of hands-on-keyboard coding, and 75+ live reviews with engineering teams.

Nearly 1,000 engineering teams have signed up for Oso Cloud already. To get started, you can sign up for a free account. For more details, read on.

What is Oso Cloud?

Oso Cloud is authorization as a service. Concretely, it consists of the following pieces:

Rather than writing custom code and ad hoc SQL statements throughout your app, then stringing them together, Oso Cloud takes you through 4 steps to get a solid authorization system:

We’ve spoken with over a thousand teams in 3+ years about their battles with authorization, and 3 patterns are clear:

While there are a number of open source projects that have bitten off pieces of the authorization problem over the years, 99% of engineering teams we meet know only one solution: DIY.

We can do better.

Authorization has gotten harder in the last decade, and it’s only getting harder still. The introduction of serverless and microservices (or even just N>1 service) throws a wrench in traditional authorization architectures. 10 years ago, all the data you needed for a single authorization decision was right there in your monolith’s database. But that assumption doesn’t hold anymore. This creates a number of knock-on challenges, like figuring out what data needs to go where, and how to normalize authorization data schemas.

In the last few years, a number of high profile engineering teams have also written publicly about the gargantuan engineering efforts they’ve undertaken to solve authorization for themselves. Google, most notably, wrote about its Zanzibar system. Teams from Airbnb, Carta, Slack, Intuit, and others have written similar tomes on their authorization projects, too.

On top of this, over the last 15 years companies like AWS, Stripe, and Twilio have established that if there’s a piece of your application that’s not core to your value proposition, you should offload it to a third-party API or library. Recently this practice has reached deeper and deeper into the application. Developers now use Okta and Auth0 for authentication, which was once thought to be impossible to pull apart from the application. Ditto for usage analytics (cf Segment) and feature flags (cf LaunchDarkly). Authorization is the next layer to go.

In 2022, developers should expect better.

Among the many challenges in authorization, perhaps the hardest is striking the right balance between a simple solution — easy to start with, gets you going fast — and one that can handle the full range of complexity that applications need over time.

Oso Cloud provides 3 core abstractions to the 3 big problems in authorization – logic, data, and enforcement – with a focus on striking just this balance.

Logic is hard because you want to be able to model common patterns – like roles and sharing – easily – while also ensuring you can support the inevitable last 20% that’s custom to your app. You also don’t want to back yourself into a corner and have to refactor the next time you need to add a new feature.

It follows that an authorization system needs simple primitives for the basics, and it needs to be programmable to support the long tail. This is how we built Oso Cloud.

In addition to the basics, our Policy Builder provides built-in code for other common patterns, like resource-specific roles (e.g., being an owner of a file), org charts, and file/folder structures. 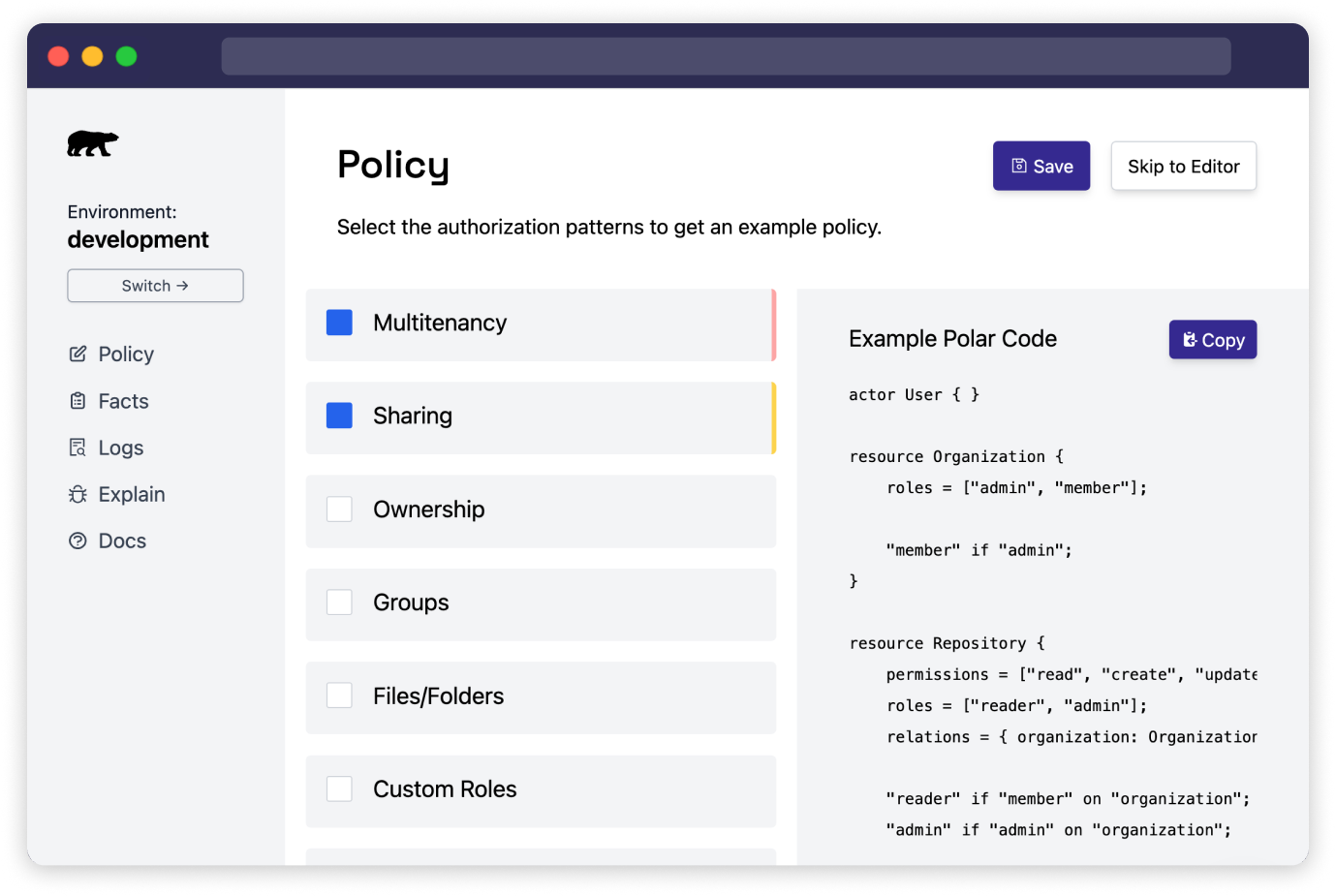 You can also get these policies and read more about the corresponding use cases in our comprehensive documentation.

One of the reasons that developers have traditionally gravitated towards custom application code for authorization is because they know that there’s almost something you need to do custom for your use case. This is why Polar is fully programmable – for anything that doesn’t fit neatly into a prebuilt pattern, you can program custom authorization logic in Polar. You can use Polar to describe any type of authorization scenario, no matter the complexity of the underlying data. For instance, suppose you want to say that “users can only push to repositories that belong to the user’s organization AND are marked as having org-wide access.” You would write:

Since Polar is a programming language, that new rule doesn’t need to care why a particular user has a member role on an org or how the repository was marked as having org-wide access — it automatically takes advantage of rules defined elsewhere in your policy.

Data is hard because increasingly you need to bring together data from multiple places to serve individual authorization decisions.

So first, you need a common way to model the pieces of your app’s domain that affect authorization. This includes things like relationships between files and folders, user roles on organizations, usage quotas, resource statuses, time of day, and anything else.

Oso provides a common format that can express any data you want: the fact. Each fact has a name and arguments. Each argument references either a resource in your application (by its type and identifier), or a literal value, like a string.

Here’s an example fact that says that Alice has an “admin” role on the Acme organization:

Here another fact that says that the “Anvils” repository is public:

Why facts? They provide an opinionated structure to the authorization problem – they ask you to express your data in the smallest possible chunks. Facts support the most common authorization models (e.g., RBAC, ReBAC) without much fanfare, but they’re also generic enough to support the long tail of use cases too, including common attribute use cases like toggles, public/private resources, and user statuses.

Oso Cloud is optimized to store and query data expressed as facts. When we receive an authorization query, we load the provably minimal amount of data required to check that permission. Latency on most queries in Oso Cloud is <10 ms.

So, Oso Cloud lets you store your core authorization data (e.g., roles, permissions, relations) in Oso Cloud. And for other data that’s not as convenient to centralize, you pass it in as context, which we call context facts. At request time, Oso combines the local data with any shared data and your policy to render a decision. Balance.

Enforcement is hard because it needs to happen in so many places. Controllers, database mappers, routers, and user interfaces all need to check authorization. Anytime you want to update your logic or your database schema, you need to go find all the spots in your code and make sure you got it right.

Oso Cloud puts all enforcement behind a uniform API for checking permissions. You drop these permission checks into your code, and that’s it. Whenever you want to update your authorization logic, you just update your policy.

Your application needs to ask many different types of questions, too:

Because Oso uses a declarative language, it can answer these questions with no extra work from the developer. We provide APIs for the common ones: authorize, list, and actions, but if your app needs to ask anything else, you can write a custom query. And this is where it starts to get fun.

When authorization gets fun

The power of SQL is that if you put your data in a standard format (rows, columns, and tables) and give it a schema, you can then query it arbitrarily.

So it goes for Oso: put your authorization data in a standard format (facts), write arbitrarily simple or complex authorization logic (Polar) – and ask any question you want.

The simplest questions are just the ones described above, and for these we provide prebuilt APIs. These just wrap an underlying allow rule.

But let’s say now we want to ask something like, “What are all of the repositories that belong to organization X AND can be read by user Y?” That’s a custom question that we might ask when filtering repositories for our UI. Oso doesn’t have a pre-built API for that, so you can write a custom query:

We have gone from the typical wouldn’t-touch-that-authorization-code-with-a-ten-foot-pole to a system that has boundaries and abstractions. A system we can query. A system we can work with and build on.

With this foundation in place, what else can we do? 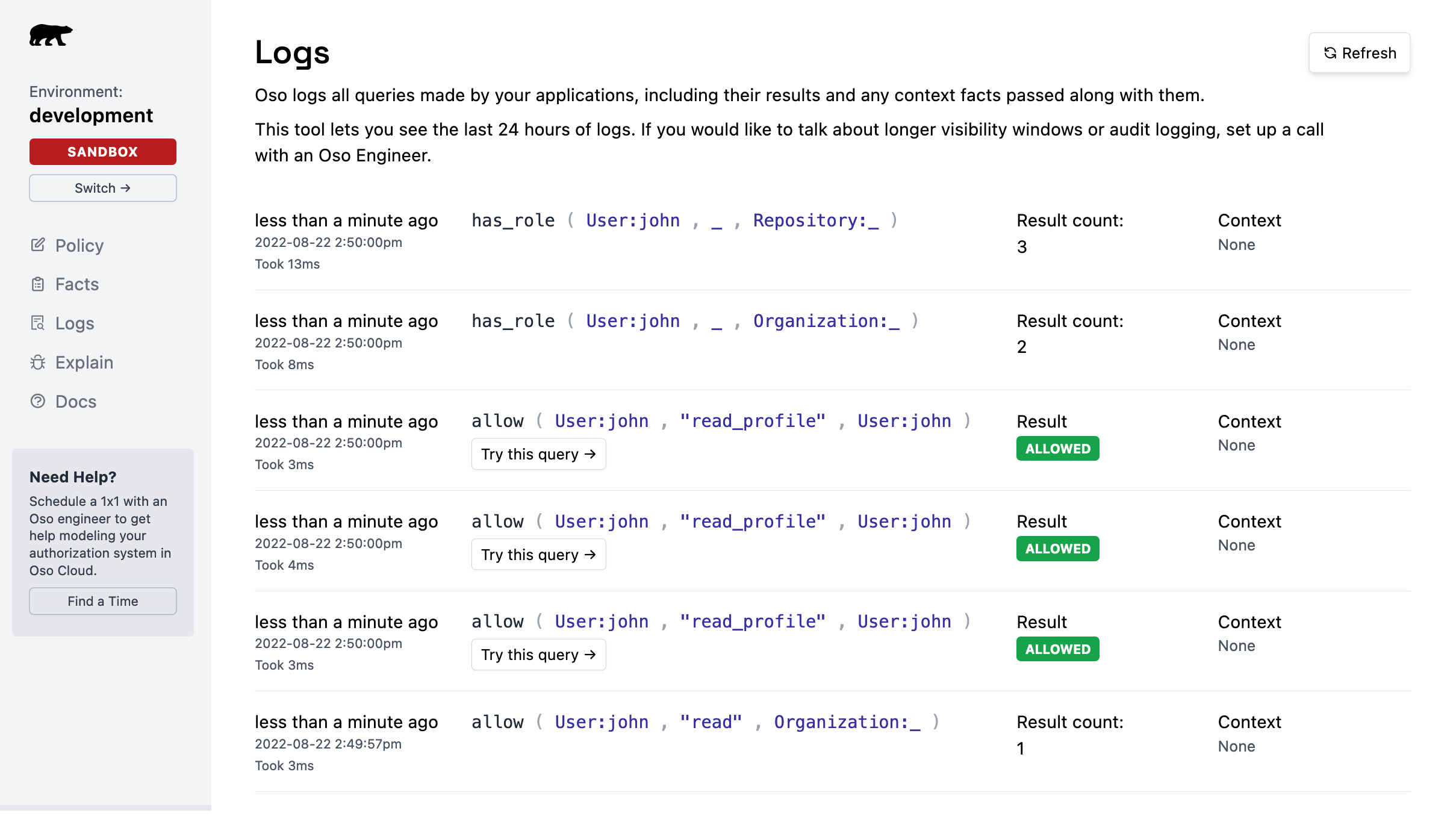 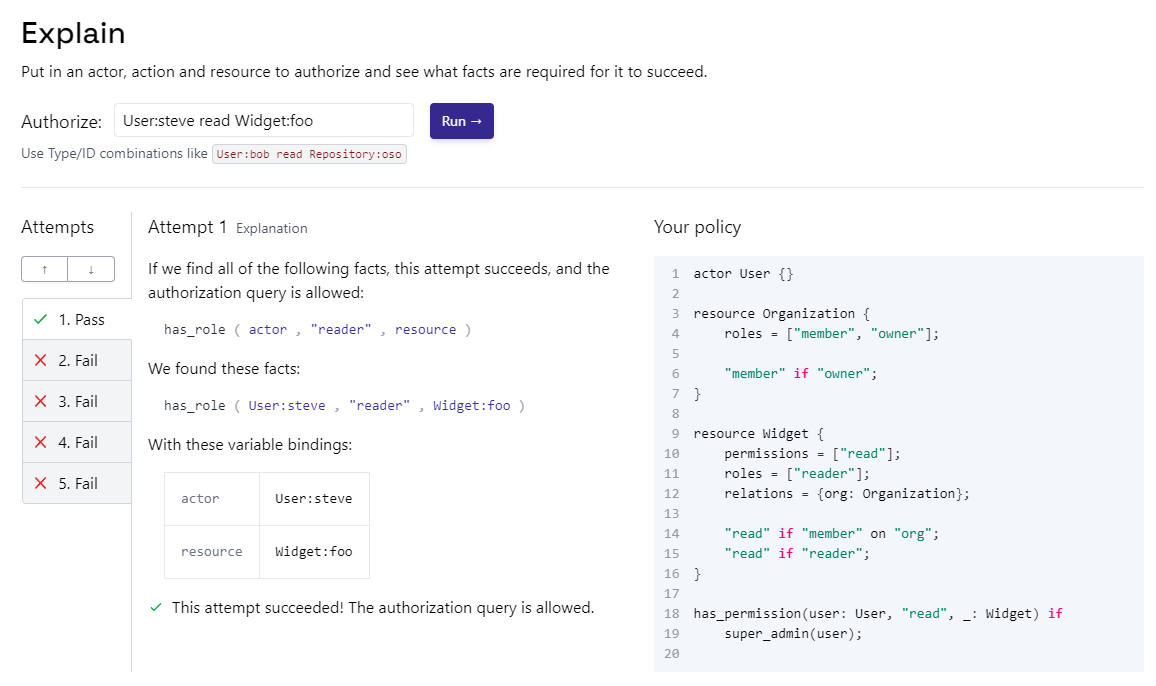 There’s a rule somewhere that says we’re supposed to conclude by saying that we’re just getting started.

Go to cloud.osohq.com and try it free for yourself.

[1] We currently run in AWS across multiple availability zones (AZs), and we add regions and AZs for new customers on demand. You can find more details on the Oso Could architecture in our docs.

[2] One of the lesser known facts about Google Zanzibar is that it became the system of record for the data it stored in Google. It also devoted significant time and resources to building tools to replicate the data back out and reconcile it between systems This is one of they key differences between how Google can implement Zanzibar — enforce a top-down imperative to move to Zanzibar – versus how the outside world can conceive of adopting authorization solutions from third-party vendors.