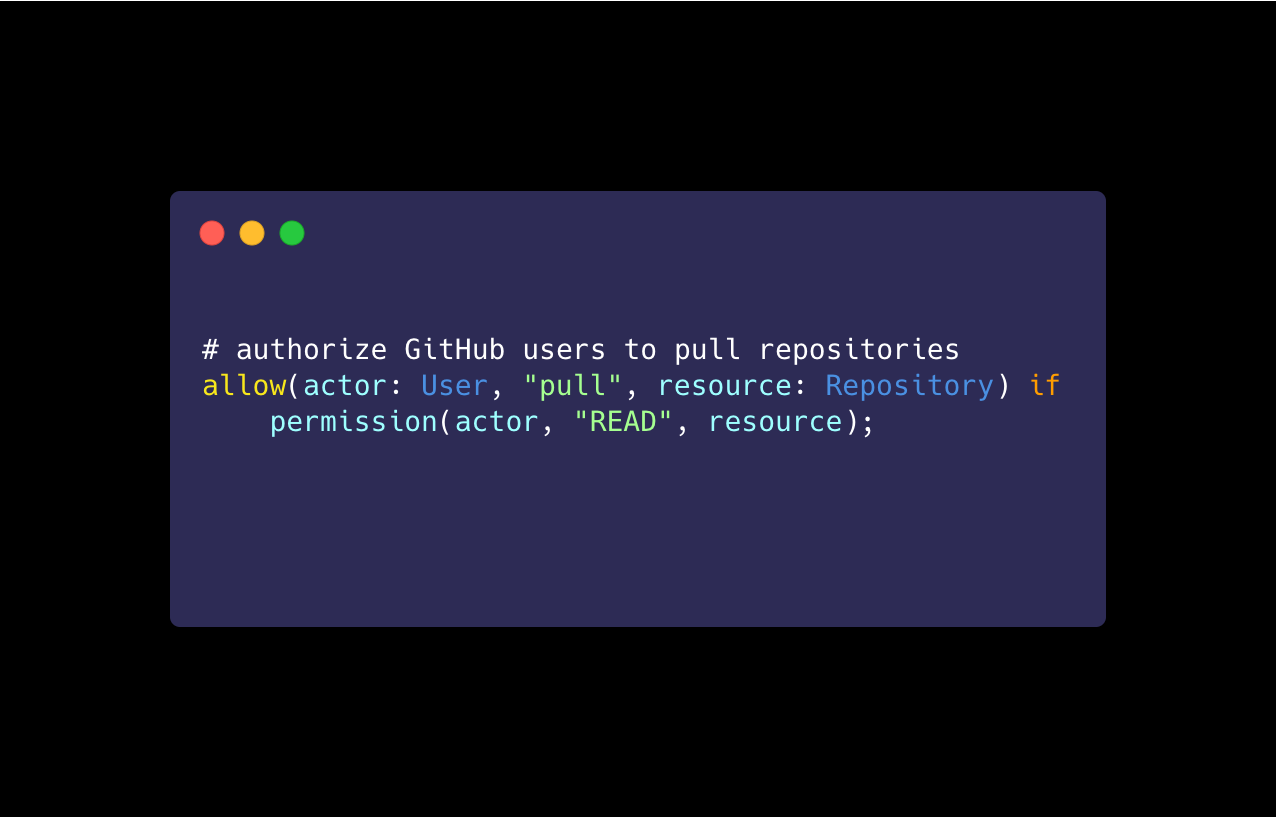 When the Oso team first started tackling problems in the authorization space, we looked to GitHub permissions as a canonical example of the not-so-simple authorization patterns that can quickly become overwhelming to maintain in application code.

GitHub provides a pure example of what motivates authorization in the first place—securing access to resources. In GitHub, the resources are repositories, and users may or may not be able to take certain actions on them. Repositories may be created, destroyed, read, or edited in any number of ways, and have child resources (issues, wikis, branches, etc.) whose access control is related to that of their parent resource. And permissions hierarchies are not limited to resources. Users can be grouped into organizations, and further grouped into teams and sub-teams, which complicates the business of controlling access even more.

In this post, we'll show how to incrementally build complex policies with Oso. We'll use GitHub's authorization model as an example, but the patterns we cover, including ownership, hierarchical permissions, and nested resources, are common to many user-facing applications.

Note: this post will focus on Oso policies and authorization logic, and won't go into detail on how to use the Oso library. For more information on this, see our guide on adding Oso to your application. Oso's open-source libraries are available in Python, Ruby, Java and Node.js.

A note on GitHub permissions

Permissions in GitHub revolve around managing access to repositories. If you're unfamiliar with GitHub permissions, you can find a nice overview here.

Authorization Use Case #1: Basic access for repository owners and collaborators

Let's start GitHub's simplest authorization use case: user accounts and repositories. If I sign into my personal GitHub account and create a repository, I am the owner of that repository. To understand what this means, let's look at the permissions available for user-owned repositories:

These three permission levels determine every action someone can take on a user-owned repository. As the owner, I get "ADMIN" privileges, which means I can do whatever I want to my repository. "WRITE" access goes to collaborators, which we'll talk about in a minute. And if the repository is public, the rest of the world gets to "READ" it, whether or not they are even logged in. Let's look at what these rules might look like in an Oso policy. The policy below, like all Oso policies, is written in a declarative policy language called Polar.

We've created a couple different kinds of rules here. The standard Oso [allow](https://docs.osohq.com/python/reference/glossary.html#allow-rules) rule is the starting point for evaluating any authorization request. We can name our other rules whatever we want, and we've defined them to match GitHub's terminology. We're using role rules to specify the role of a user with respect to a particular resource (i.e., "OWNER" of a Repository), and permission to specify a user's permission level (i.e. "READ"). We'll use these supplementary rules when we add more allow rules to the policy later on.

One other thing to note about these rules: the User and Repository types specified for actors and resources refer to the object types actually used in the GitHub application code. Oso makes it possible to pass application objects directly into the policy evaluation engine.

A quirk about GitHub permissions

We're going to focus on owners and members. Like repository owners, organization owners can take any action on the organization.

Notice that the logic for defining Organization owners is different from the logic for defining repository owners. Organizations do not have an owner field (there can be multiple owners). Instead, organizations store owners in the .membersWithRole field, along with every other organization member. GitHub distinguishes owners from other members by giving them a role called "ADMIN" (not to be confused with the "ADMIN" permission level for repositories). Normal members simply have the "MEMBER" role.

If you didn't get all that, not to worry. All you really need to know is that this logic reflects our best approximation of how the data would actually be stored in GitHub's application, which is why it looks a little strange.

We can now use the role rules we've written to specify permissions for repositories within organizations. Org members can have any of the following permission levels for a repository in an organization:

As a quick recap, our policy now depends on three permission sources for repository access: ownership, organization base permissions, and direct access (or collaboration). And each new permission source required minimal, if any modifications to our existing rules. This is one benefit of declarative policies and additive rules. But we're not done yet—let's go over one more permission source for GitHub repositories: Teams.

Authorization Use Case #4: Controlling repository access based on permissions 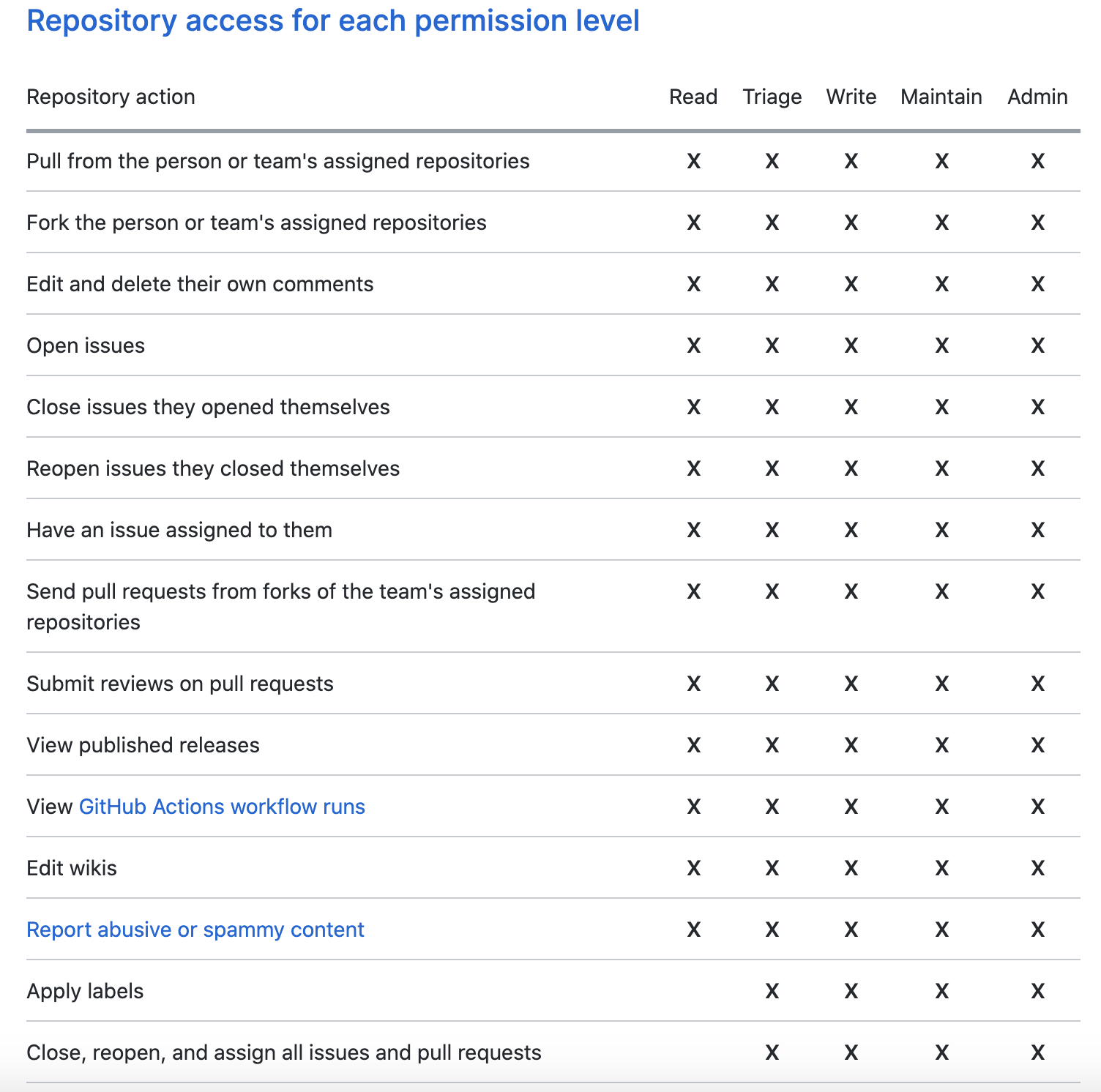 Let's take a closer look at accessing Issues. We can easily say that anyone with "READ" permission on a repository can open an issue.

Likewise, we can also express that anyone with "TRIAGE" permission on a repository can close any issue.

But what about the rule that says anyone with "READ" access can close their own issues? We could write something like:

But that doesn't feel right, because we should be checking the ownership of the issue in the policy, not the application. In fact, the resource here isn't really the Repository, it's actually the Issue. Recall that Oso rules can be written directly over application objects that are passed into the policy engine (which is why we can write something like Repository.owner in our policy). Here's where that really comes in handy: we can easily change the resource our rules are written over from Repository to Issue, allowing us to access all the issue's application data from inside Oso policies:

The strategy of writing rules over sub-resources can also be applied to comments, pull requests, wikis, and any other Repository sub-resources that need to expose their own data to the policy.

Before we wrap up, let's look at one more feature you could build with Oso. Github has an open issue for "custom roles with fine-grained repo permissions." This feature would allow repository admins to create their own roles (what we have been referring to as "permissions", pardon the confusion) with custom repository access rules.

Let's say that GitHub implements this feature by storing custom permissions on Organization objects, and that a custom permission has a name field (e.g., "CUSTOM_READ"), and an actions field that stores the actions this permission allows users to take on repositories (e.g. ["pull", "push", "fork"]).

We could integrate this new custom roles system into our existing Oso policy with one rule:

This might not be exactly how GitHub chooses to implement this feature, but Oso's embedded nature lets it use the whatever data model the application developer chooses. Oso's flexible design aims to simplify the process of extending and modifying your permissions system.

GitHub's permissions scheme is a useful testing ground for Oso because it demonstrates many common, but not-so-simple, authorization patterns. In this post, we covered:

We've hopefully shown that Oso simplifies the process of expanding a permissions system, and facilitates writing policies that naturally represent relationships between actors, actions, and resources as they exist in your application.

At the very least, you're now a semi-expert on GitHub's permissions model. This post is meant to be less a guide, and more a relatable example of the authorization logic that Oso policies can express.

Getting started with Oso

If you'd like to learn more, you can check out our quickstart, or to see how to add Oso to your application. We're considering writing a follow-up post on how to add Oso to a GitHub-like application; if that's something you're interested in, drop us a note. If you have questions, feedback or just want to learn how to expertly manage access to your repos, join us on Slack or open an issue.